In the first part, we built our first basic program in SIMPOL and learned how to use the IDE to do various tasks, including basic debugging. In this part, we will learn how to debug into the source code of one of the supplied libraries.

Debugging a program is an important aspect of the development process. Since so many parts of Superbase NG are delivered as libraries, it is important to be able to assess what happens to your program when it goes into one of those libraries, especially if you think that there is a flaw in the library itself. Another important aspect is to learn how the libraries are written, and see how they work. This can be a useful tool for learning about the programming language. Using the Superbase NG IDE you can debug into any library for which the source code (as a project) is available.

We are going to be using the project learn01, so we should open this. First close whatever your current project is (File>Close Project). Now open learn01.smp (File>Open Project)

To add source code from another project to the current one, in the project tree view right-click the root node and select “Import Modules From Project” 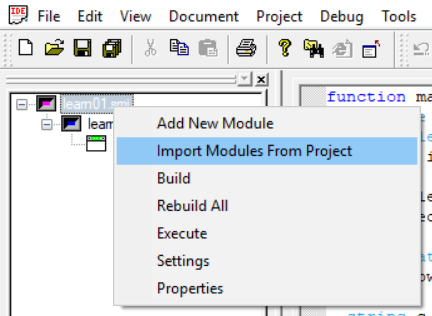 In the resulting window find: C:\SIMPOL\projects\libs\sbldatelib

And then open the SBLDateLib.smj

This will add the library project into the current project as a module. Projects loaded in this way cannot be modified, the source code is read-only. Once it has been added, the IDE will retrieve the function and type information, and add it to the tree 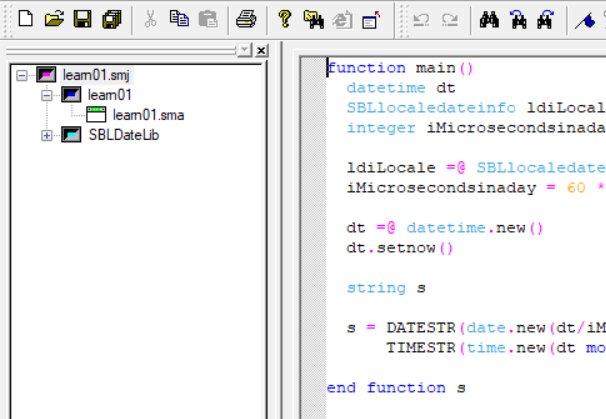 Project after importing a module for debugging

Now that the project code has been imported, we can now open the source file in the editor. First expand the entry for SBLDatetLib and then double click on SBLDateLib.sma.

To debug inside the call to the library function we will place a break point at the beginning of the function where indicated below. This is done by clicking on the line and pressing F9 (or Debug>Insert/Remove Breakpoint).

Setting a break point in a library function

To enter debugging press F4. Then press F5 to run through the program. Program execution should halt with the line containing the break point highlighted, as shown below: 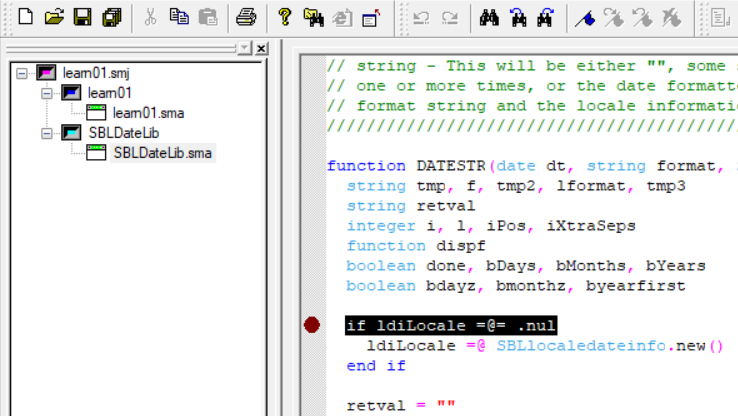 At this point, we can start single-stepping through the code (using F11), examine the variables, and evaluate what is happening to the code. In the beginning of the function most of the variables will be equal to .nul, since they have been declared but nothing has yet been assigned to them.

Further into the function, as shown in the following image, the variables can be seen to the right in the watch window and the call stack is shown in the window below that. 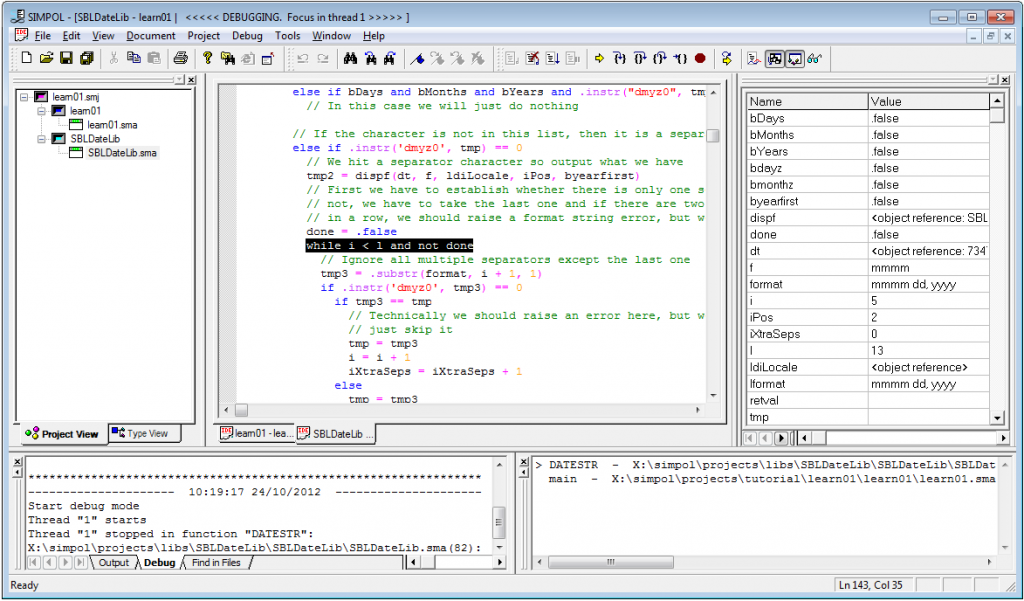 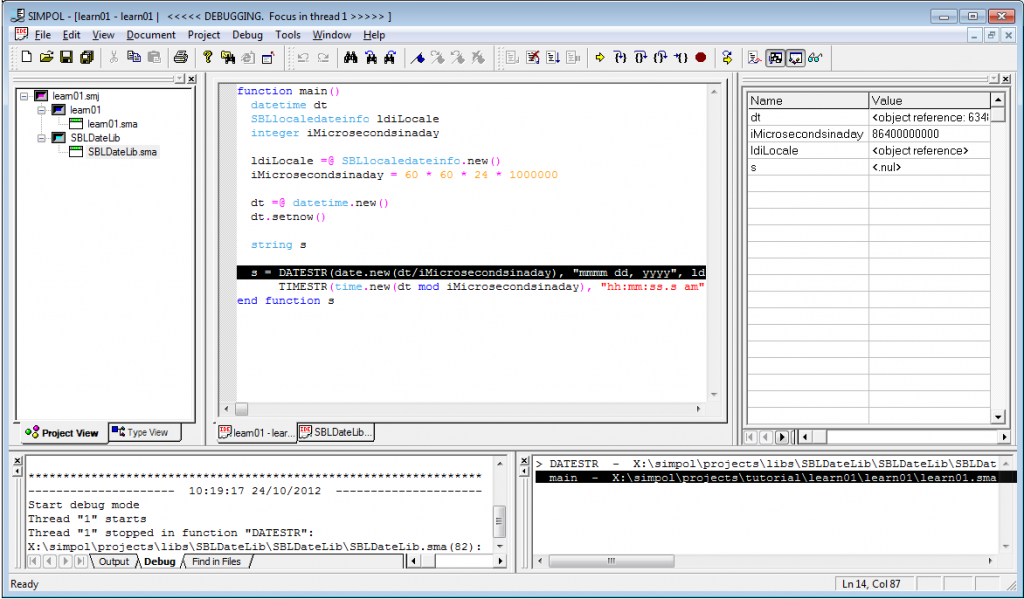 Debugging showing the variables at a different call stack position 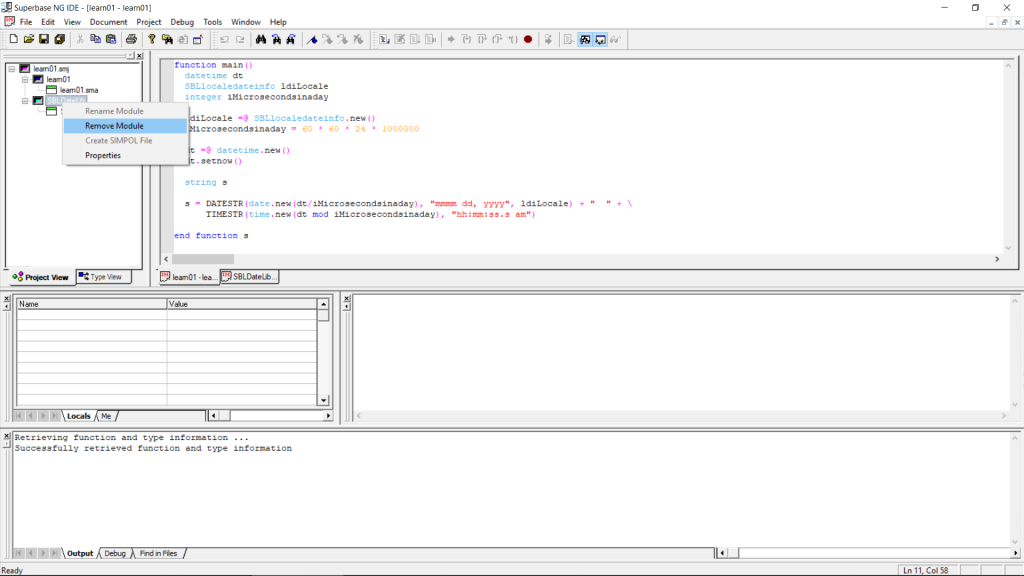 In this chapter we have learned how to:

Now its time to open up some of the sample projects and try them out. Have fun!